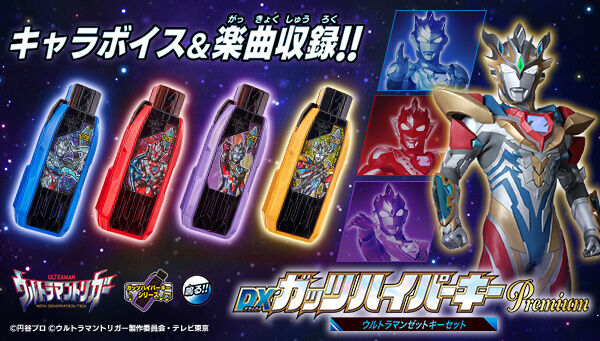 From Premium Bandai comes the DX Guts Hyper Key Premium: Ultraman Z Key Set. These Guts Hyper Keys first appeared in episode 7 and 8 of Ultraman Trigger: NEW GENERATION TIGA. In this two episode arc, Haruki and Ultraman Z land on the Earth of Ultraman Trigger! With the Z-Riser damaged and the Ultra medals stolen in a confrontation with Alien Barossa, Haruki uses a Guts Sparklens as an alternate way to transform into Ultraman Z. Designed by Akito, Haruki was also given a Guts Hyper Key for each of his forms.

The Hyper Keys also come with a voice mode and a soundtrack mode.

Voice mode will cycle through over 30 different lines from the Ultraman Trigger TV series. These lines are taken from Ultraman Z, Haruki Natsukawa, Kengo Manaka, and Akito Hijiri.

Soundtrack Mode will allow you to play one of four songs during transformation or finisher activation. These tracks were originally played in the Ultraman Z TV series. The songs included are:

Character Voice Mode and Soundtrack Mode is also available! Over 30 lines from 4 characters are included.

Compatible with the Guts SparkLens

Compatible with the DX Circle Arms

“Burn in Scarlet Flames, the Power of Courage!”

Overseas fans can use From Japan to purchase exclusive tokusatsu merchandise. Click here for our guide to using From Japan.

Yui Asakura Victim of Stalking and Home Break In

Mostly Speakin’ Sentai #150: “Kyuranger: The Wish.com Version of Fiveman” w/ Joe from “Hit It & Crit It”