Bandai Namco have released their financial highlights for the second quarter of the 2015 fiscal year.

In the following post, Toys and Hobby Business refers to the sales made by role play items and action figures under any given branding. The Net Sales by Character number refers to the whole of the brand’s sales over the year, including items as CD, DVD, and other miscellaneous items. For the purpose of international clarity, the Super Sentai line is referred to as Power Rangers within the financial report. 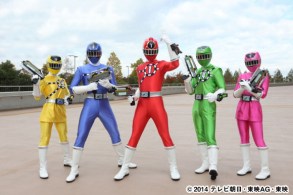 In the Toys and Hobby sector, Super Sentai (“Power Rangers”) made 7.4 billion yen. This corresponds to the first half of Ressha Sentai ToQger. The brand is expected to earn 12.0 billion yen by the end of Fiscal Year 2015. Overall this will be a drop from 2013’s Zyuden Sentai Kyoryuger, which earned 14.4 billion yen and 2011’s Kaizoku Sentai Gokaiger, which earned 13.0 billion yen. The number puts ToQger above hits like Samurai Sentai Shinkenger and inline with Engine Sentai Go-Onger, another successful line in the Sentai brand. The actuals for the first six months are up from the estimated 7.0 billion yen predicted earlier in the year by Bandai Namco.

Earnings made by the brand as a whole in Net Sales by Character will be down from 30.7 billion yen to an estimated 25.6 billion yen for the Fiscal Year, with 11.1 billion yen made in the first six months. 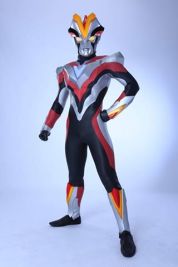 The Ultraman brand in the Toys and Hobby Business sector is reported as having made 1.5 billion yen in the first six months of the year. This number matches the amount of money made in the same time during the previous year. The brand is projected to make 3.0 billion yen overall by the end of the Fiscal Year ending March 2015. If projections hold true, this will be a drop from the 3.2 billion yen earned in Fiscal Year 2014. The premiere of Ultraman Ginga S, the second Ultraman Ginga season, and its toy line, was expected to help the brand reach 4.0 billion yen earlier this year but Bandai Namco have now lowered their projected earnings for the brand. With various sales to larger organizations, Tsuburaya’s financial state was in dire need of help but the company recently announced they were finally able to pull themselves out of insolvency.

The biggest success story by far in this Fiscal Year for Bandai Namco is Level-5’s Yokai Watch property. From the studio behind Inazuma Eleven, Danball Senki, and who partnered with Sunrise to create Mobile Suit Gundam Age, Yokai Watch has been an unprecedented hit for all parties involved. Yokai Watch will overtake Kamen Rider as the top earner in the Toys and Hobby Business sector this year, a spot the brand has regularly held, although the Mobile Suit Gundam brand shows greater earnings this year. With 40.0 billion yen projected earnings in Fiscal Year 2015 and 22.5 billion yen earned in the first six months, Yokai Watch will make double the best performing tokusatsu brand, Kamen Rider.

With the addition of Yokai Watch, Gundam, Kamen Rider, Super Sentai, and Aikatsu! look to be the strongest brands in Toys and Hobby for Bandai Namco in the coming year as shown in the following quote:

“Specifically, in the Toys and Hobby Business in Japan, products of the new IP (intellectual property; including intellectual property of characters) Yokai Watch proved to be popular while long-established IP products such as Mobile Suit Gundam, Kamen Rider Gaim, and Tokkyger (the Power Rangers series) in addition to other products including the UP Aikatsu! for girls, sold favorably.”